The Valknut is a symbolic representation of Odin. It has two other names – Hrungnir’s Heart and the Knot of the Slain. The reason the Valknut is known as Hrungnir’s Heart is that the Prose Edda mentions a legend that claims Hrungnir, a frost giant, had a heart as strong as stone that ended in three sharp points. It’s generally assumed that the Valknut and Hrungnir’s heart is the same symbol, so general consensus wins out on this issue for me.

For anyone who doesn’t know what the Valknut is, this is the symbol: 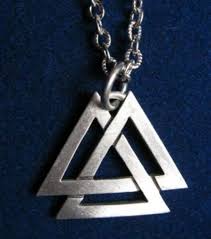 A lot of mystery surrounds the Valknut, and it is known as the “Knot of the Slain” because those who wear it tend to die violent deaths. The idea that a piece of jewelry could cause you to die is ridiculous (unless it’s cursed, of course), and the Valknut isn’t cursed.

The truth is, the Valknut is Odin’s symbol – only those who follow Odin’s path specifically will wear this symbol. All Asatru/Heathen (whatever you want to call yourself) will pay homage to Odin, but there aren’t people lining up outside Odin’s door saying “Hey, your path looks nice and comfy. Let me have some fun and try it out!”

Odin’s path isn’t simple, and it isn’t for the faint of heart. Odin’s path demands self-sacrifice – the part Odin plays in the mythology practically shouts that. But it is also a path of leadership, and leadership often requires you to make ruthless decisions that tear you apart. Leading has rewards, of course, but leadership is not easy.

Odin’s path is that of challenge. In quite a few of the myths, Odin goes out to wander the world in order to test himself against opponents – he wants to know where he stands in the world, and so, in that way, walking is path is walking towards self-identification through competition. Not only does Odin put challenges before you, but you are encouraged to seek challenge out yourself. A challenge isn’t necessarily a physical battle – there are other types of challenges, after all, and Odin is especially fond of wit-matching challenges. You definitely see that in the way he pits himself against Loki, Thor, and others in the lays of the Poetic Edda.

Challenge, of course, is where the real difficulty of walking Odin’s path comes in. Because challenges upset people. No one likes to lose, and there are a lot of sore losers in the world. Dangerous fights break out; people die. There are also people who choose to walk Odin’s path without truly understanding the path that they are committing themselves to walking. Odin’s path is probably one of the hardest paths to walk because walking it requires putting yourself out there where the world can make or break you.

The biggest danger people face when they choose to walk Odin’s path is that a lot of people misunderstand Odin. Odin is a warrior scholar, and it’s when you can wrap those two concepts together instead of separating them that he begins to make more sense. But then you have to throw in the fact that he’s also a god of magic, and well, chaos ensues.

So while donning a Valknut won’t kill you, you shouldn’t wear one if you don’t plan to walk Odin’s path. Symbols are powerful, and the Valknut is an ancient symbol. It’s best to be respectful of ancient symbols – after all, runes are ancient symbols too, and they hold incredible power.

Now, I’m not trying to scare anyone away from Odin. I just happen to be an intense person, and I really want people to think about what they are doing before they give an oath to follow a God that they may regret. Because oaths to Gods – well, you don’t break those easily. And Gods don’t forgive easily, either. Better to know what you’re getting into before you get stuck.

As for me, I’m ready to take the next step – I am ready to transition from a Valknut pendant to a Valknut tattoo, once I can afford the ink. The Valknut is meant to be inked onto your skin. For a man, the Valknut should be worn above the heart – according to ancient lore. Women, on the other hand, shouldn’t get tattoos on their breasts. I don’t know why this is, and I wish I had the source for it now so I could share it. Unfortunately, I don’t have the link. When I do get it inked, I may get it on the back of my right hand. And, at the same time I get the Valknut, I will also get Jormungand around my wrist.

Tats aside, there’s an easy way to figure out whether you are fit for Odin’s path. Buy a Valknut pendant. Wear it for a month. See if you can handle what happens afterwards. And, until you are certain you can handle a life like that, don’t swear yourself to Odin. After all, Odin is the chieftain of all the other gods. If you piss him off, who are you going to turn to? Some might feel like being smart here and saying “Loki,” but I’ll tell you one important thing everyone should know about Loki – he doesn’t like being second choice. That’s why, for me, Odin and Loki are equivalent gods, and I try to dedicate myself to walking both of their paths as evenly as I can. It’s not easy, but I wouldn’t be following Odin and Loki if I wanted an easy path to walk.

Now, in conclusion, I’d like to share one of Michaela Macha’s poems, all of which can be found on the Odin’s Gift website. As a quick reference note, “valknot” is an alternative spelling of valknut. This poem is called “Wearing the Valknot.”

As I close the clasp of my valknot chain
I offer my neck to the noose again
And bind myself with the trifold triangle
To Hár, and wyrd´s tight-woven tangle.

With points and sides of three times three
As Ygg´s nine nights upon the Tree
It marks me willing sacrifice,
Rewarded as I pay the price;

As I pass ecstasy and pain
I lose myself, myself to gain;
This sign of fire, way and aim,
Leads me through darkness and through flame.

I pledge the fullness of my life,
My fealty to the Lord of Strife,
I choose to wear the knot of death
And give myself with every breath.